Dan Shamburg still remembers the day he first baled with a Vermeer. There were 50 acres of windrows waiting for him in the field, with a narrow window to get it all baled. A few acres into the job, his baler broke down. Oh, no.

To make matters worse, his dealer said it would be a few days before they could get Shamburg’s baler back up and running. With over 40 acres left to bale, Shamburg had no baler and no time to waste. So, he called in a favor.

“A friend of mine runs two Vermeer balers, and he said ‘come grab one of mine.’ Up until then, I’d been running at four miles an hour. I went back with the Vermeer, and I was running at eight miles an hour. I was done way before I thought I would be, even after the first baler broke down. I was left wishing I’d have raked more acres,” said Shamburg, who puts up 10,000 to 15,000 round bales of cornstalks, alfalfa and hay near Tekamah, Nebraska.

That’s when Shamburg made the switch to the Vermeer 605N Cornstalk Special baler. Initially, it was the performance of the Vermeer baler that impressed him most.

“Most I’ve ever done is 800 bales in a day, and I’ve never had anything besides Vermeer that would even come close to that. The Inline™ Ramp is so much faster on gate cycle times that you can have the bales dumped out and you’re gone again. It really saves you a lot of time,” said Shamburg.

But as he got through a few thousand bales, Shamburg noticed something else: None of the pickup teeth were breaking. Whereas on his previous baler, Shamburg was accustomed to changing out all of the pickup teeth every 3,500 bales or so, he’d produced nearly 10,000 bales without breaking any while baling.

“The best thing (about Vermeer balers) is the pickup teeth. I mean nobody wants to lay in the dirt beneath a baler changing pickup teeth. With Vermeer, if you can keep the teeth out of the dirt, you won’t need to change any. And I run in some really, really rough conditions,” Shamburg said.

Since making the switch six years ago, Shamburg has owned seven or eight Vermeer balers, putting close to 10,000 bales on each one. The durability of Vermeer balers, he said, is a testament to the heavy-duty components throughout the machine.

“They’re built a lot heavier. If you hook anybody else’s baler behind a pick up and you go down the road with it, and then you hook a Vermeer up behind your pickup and go down the road with it, you know it’s back there. It feels twice as heavy. That’s why I think they hold together so much better than other balers,” Shamburg said. “It’s also a lot less maintenance. Oil ‘em up and make a few adjustments, and that’s about it. I have 11,000 bales on this baler and haven’t broken a chain yet.”

“I take pride in doing things right, and that’s probably why I can’t keep up with the demand of customers. With the Vermeer baler, I get comments about how tight the bales are. They’re solid and shed water well. That makes a big difference. You produce a bunch of sloppy bales and charge somebody good money, or you go in and make some really nice bales and charge them the same, you know who’s going to get the job,” said Shamburg. “Everything about Vermeer balers has been good. I’d really recommend them to anybody.”

And that’s why Dan Shamburg switched to the Vermeer 605N Cornstalk Special baler. 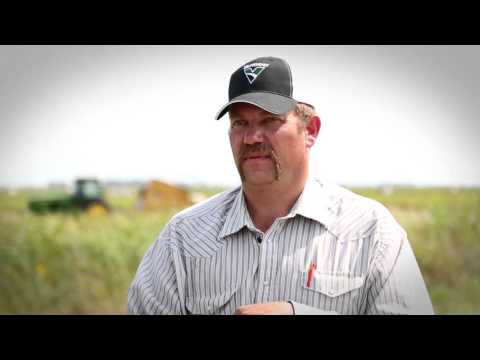