In a family business, passing the torch from one generation to another is a major achievement, particularly for a family-owned company that successfully competes globally against some of the biggest names in agriculture and construction.

In November, when Mary Andringa turned over the reigns to her son, Jason, he became the first family member from the third generation to lead Vermeer through the next stage of this remarkable legacy.

Studies show 88 percent of family owned companies never survive long enough to make it to the third generation, and 96 percent fail to make it to the fourth (Family Business Review, 2012). Today, the Vermeer brand has never been stronger, the future never brighter, the focus never sharper, the passion never greater and the products never better. This didn’t simply happen by accident.

How Did We Get Here?
For nearly 70 years, a culture of continuous improvement has framed the vision and defined the persona and character of this market-driven, family-owned company. It’s a culture based on integrity and an unwavering set of principles with the intent of helping customers become more productive and more successful while doing our best to protect our environment and valuable resources. It started with Gary Vermeer and four core “P” principles that guide this company: Building innovative Products, with hard-working, sharp-thinking People. Receiving a fair and reasonable Profit for the work we do. And operating the company based on strong Christian Principles.

Many innovative products were inspired by Gary. In the 1970s, Vermeer marketed trenchers and vibratory plows for utilities and underground utility contractors, plus tree equipment to remove stumps and transplant trees. In 1972, the big round baler and “One-Man Hay System” put Vermeer on the map in agriculture and sales nearly tripled overnight. Shortly after that, Vermeer added brush chippers and tub grinders to the tree equipment line and increased the capabilities of the construction product line with vastly improved fluid power technologies and machines designed to trench the “untrenchable.”

The Second Generation:
Gary Vermeer may have started it all. But the next Vermeer generation took it to a whole new level and turned Vermeer into the global company it is today. When Bob Vermeer and Mary Andringa took charge in the mid-1980s, they didn’t simply maintain the status quo.

They doubled down their efforts in every facet of the organization. During their tenure, Vermeer accelerated product development, streamlined the manufacturing process and expanded the Vermeer global footprint by recruiting, training and engaging a rapidly growing workforce in every corner of the world. They opened new plants and offices in Latin America, Asia Pacific and China and significantly upgraded Vermeer operations in the Netherlands, which serves Europe, the Middle East and Africa (EMEA). Vermeer also pioneered new technologies in underground construction (with horizontal directional drills), giant terrain-leveling excavators for surface mining and developed a broad range of products for wood waste reclamation and the biomass market.

“The Vermeer family and Board of Directors have worked diligently for more than two decades to establish a robust and extensive family employment policy and succession planning process. We are confident Jason’s education and experience have prepared him exceptionally well to lead the company,” said Bob Vermeer, Chair Emeritus.

And that’s where third generation, Jason Andringa steps in, bringing with him experiences that have fostered a deep commitment to the markets we serve, a freshened focus on innovation, a passion to honor the company’s legacy and with a long list of achievements that extend well beyond his age.

Before joining Vermeer in 2005, he spent time as an engineer at NASA’s Jet Propulsion Laboratory working on various projects, including the Curiosity rover that’s now on Mars.

He graduated with a Bachelor of Science degree in Mechanical Engineering from Calvin College. He then earned two Masters degrees: one in Aeronautics and Astronautics from Massachusetts Institute of Technology (MIT), the other in Business Administration from the University of Southern California.

“When I was 21-years old, I stood in Russia (Siberia) with my mother, seeing a piece of equipment built in Pella, Iowa at a company my grandfather started. And it was then that I realized I wanted to be a part of it. Not only because of the interesting, complex equipment this company makes, but because of the work this equipment does to better people’s lives around the world. Today, I’m excited, honored and humbled to have the opportunity to continue my family’s legacy of leadership at Vermeer into the third generation. We will continue to fulfill our promise to our customers by capitalizing on our strengths – innovative, high-quality products, entrepreneurial dealers and the diligent practice of continuous improvement while continuing to create opportunities for growth with today’s fast-moving customer expectations.”- Jason Andringa

Mary Andringa: A Lifetime Of Achievements:
After six years of teaching, Mary Andringa, daughter of innovator and company founder Gary Vermeer, charged into the manufacturing industry when she joined the family company, Vermeer Corporation.

Between the time Mary arrived at Vermeer in 1982 and today, Vermeer has had a ten-fold increase in sales. But, as Mary would tell you, the growth of this amazing company is not the real story. Instead, it’s a reflection of the hard work of great team members, entrepreneurial dealers, and a relentless search to continuously improve in every corner and at every level of the Vermeer global family.

We celebrate Mary’s transition to Chair of the Board with a few of her many significant milestones during her career. 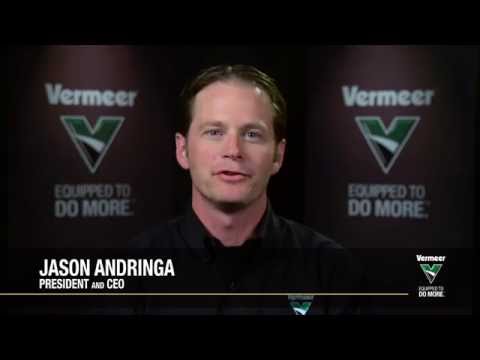